Blog
You are here: Home / Blog / Main Blog / An Update On the Flint, Michigan Water Crisis 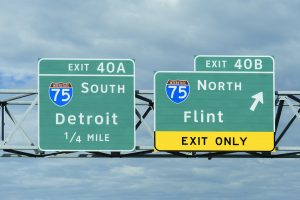 You may have heard something in the news about the water crisis in Flint, MI. Residents of Flint have been living with tainted and contaminated water from lead and other toxins thanks to cost-cutting measures.

The problem started back in 2014 when the city of Flint announced plans for a new pipeline to deliver water to the city from Lake Huron. While that construction was underway, they temporarily turned to Flint River for a water source. Residents of Flint began noticing that their water tasted, smelled, and looked funny.

In 2015 Virginia Tech and the Environmental Protection Agency performed tests that found dangerous levels of lead in water being delivered to homes. Lead exposure can cause problems for the heart, nerves, and kidneys. For children, it can also cause impaired cognition, delayed puberty, hearing problems, and behavioral disorders.

It was also discovered that just about half of the service lines delivering water to homes in Flint were made of lead which began leaching into the water supply because the water was not being properly treated. Several lawsuits have been filed against the city of Flint and the state of Michigan for monetary compensation as well as refunds for water bills.

The federal government and the state of Michigan both declared the water situation in Flint a state of emergency. Even though this story has dropped out of the headlines, the crisis remains ongoing. The water is still not safe to drink without using a filter, and most families use bottled water to drink, cook, bathe, and brush their teeth.

More than a dozen local and state officials have been criminally charged and some of them could face years in prison. Millions of dollars have been spent and the city has switched to Detroit’s water supply. The quality of the water has improved but is still not safe.

Make sure your family is drinking clean water by scheduling your free water analysis. Call Schultz Soft Water at 800-289-2807.

Could You Be Drinking Too Much Water?